For those of you that like our history posts, we thought we would share some old photo’s that we have. We are very lucky to call Pier House our home. We believe that we are the current custodians of this piece of history, while we live here.

Have a look at our 8th December 2022 post on facebook here as we left a time capsule whilst renovating.

Pier House dates from pre-1800, we believe, local knowledge tells us. From the 1600’s it was a salt store for the herring industry, built by the Dutch. Although mapping of Scotland was very poor at that time. So we are struggling with an exact date. The building has had many uses over the last 300 years. It has been a customs house and there are remains of the old weigh bridge still visible in the turning point at the front of the property.

In the early twentieth century, it was three separate dwellings and, as can be seen on a map from 1875, it was then used by the Free Church of Scotland and as a School. The next two photos we believe were taken in the 1950’s. Then the next two in the 1960’s you can see quite a few changes. Then the last photo is as it is today.

The View our self catering cottage was originally the boat house which was converted by Pier House’s previous owners and renovated by ourselves in 2021. If you would like to know more about the history of Glencoe you could look here and here.

We ( Andy and Annie ) renovated the interior of The View in the early months of 2021, this included laying new oak floors, fitting a fully integrated new kitchen and fully decorating throughout. Outside also kept us very busy as we landscaped about a third of an acre. Finally opening to guests in September 2021. Here are some before, during and after photos of the two areas we would like to share with you.

An area was leveled so we could create a space for two adriondack chairs. Andy also hand built a table and two benches out of sleepers for guests to dine outside too. We have some amazing sea and mountain views and being on the west coast have some of the best sunsets. The dining area sits under a silver birch and has tasteful pretty solar lighting for dining in the evening.

Deer regularly stroll through our grounds so choosing plants they dont like to eat and that can cope with salty air is a challenge. Annie is looking forward to improving the guest garden area with further planting this year. We also have a live webcam facing the Pap of Glencoe you can see this here.

For great walks in the area have a look here.

We had a great first year, with lots of great reviews and we are starting to book up for 2023. We are looking forward to another busy year and to meeting lots of new people. If would like to book please click here

As we approach the end of 2021 here are some Winter shots from Andy’s photographic archive. Currently the weather is warming up, but the Glencoe hills under a blanket of snow offer world class adventures.

We got off pretty light with Friday’s Storm “Arwen”…

With the passing of the storm it’s been a beautiful weekend, Sunday especially so with a sprinkling of snow that always transforms the landscape. Today we spent some time in Glen Nevis at our favourite “coffee spot” and then later in the the afternoon got high above Loch Linnhe to watch sunset.

Some photo’s here from both Saturday & Sunday, and don’t forget our webcam that slowly seems to be gaining popularity with approaching 200 hits/day…

Have a great week ahead folks… A&A. 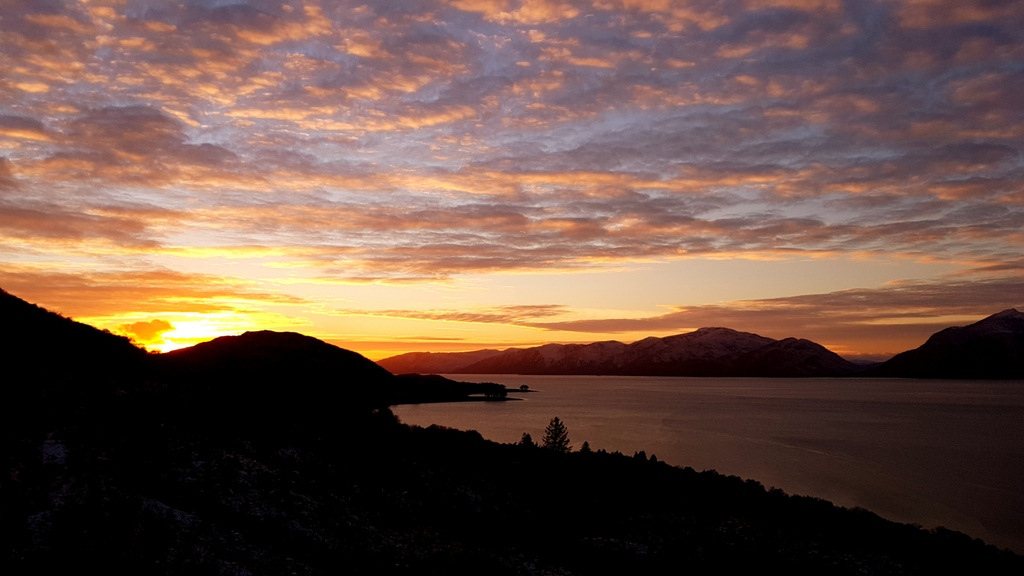 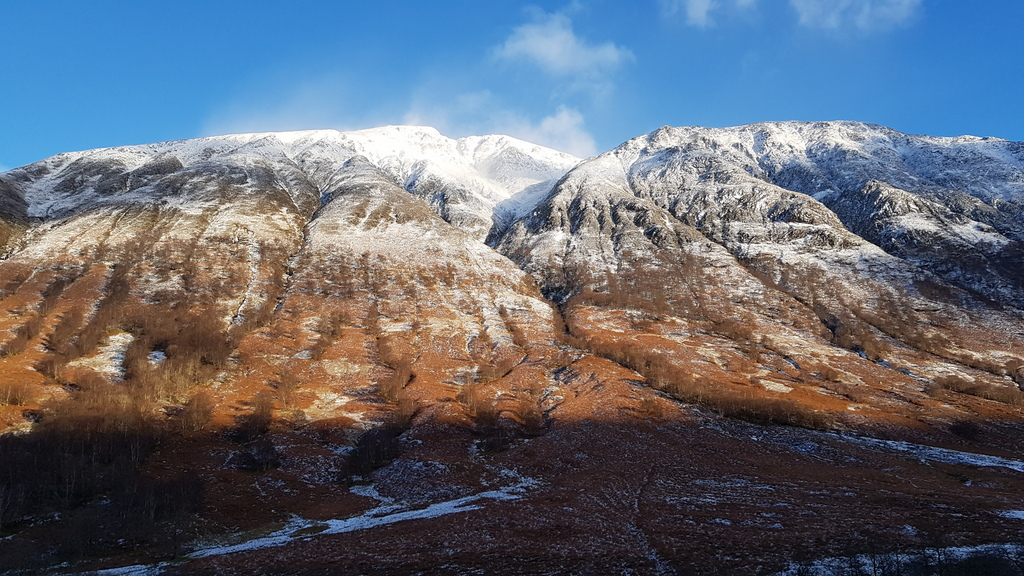 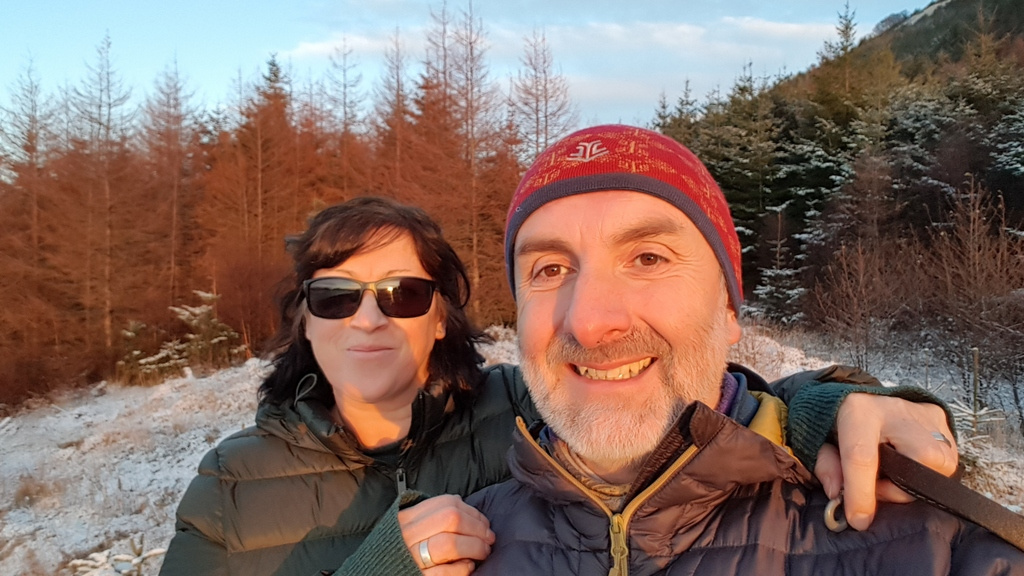 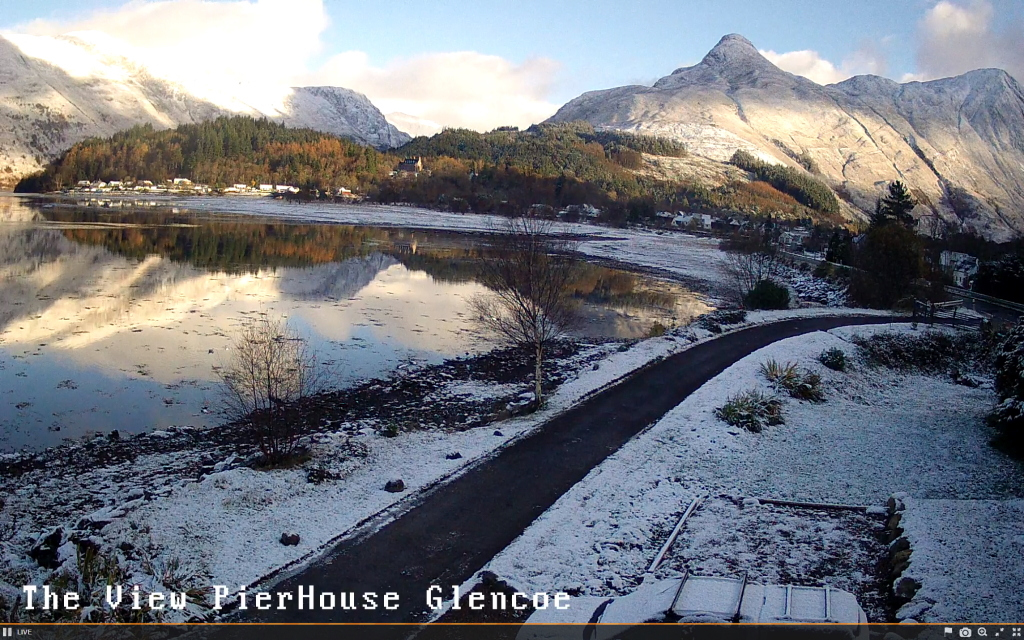 Today we are sharing some photos Andy has taken. Glencoe is world famous for its mountains hikers and mountaineers are drawn to them. However did you know for geologists, this is where the idea of ‘cauldron subsidence’, now called ‘caldera collapse’, was born over 100 years ago. Glencoe was the first place in the world where ‘cauldron subsidence’ was recognised in ancient volcanic rocks.

Good Morning todays post is all about dramatic skies, photo’s taken by Andy. We even have one of them framed in The View. If you fancy a short autumn/winter break take advantage of our 15% discount. Have a great weekend

Of course we regularly get snow around Glencoe ; it often lies on the hills from November until May, but we often escape down here at sea level. We usually get a week or two of snow on the ground each Winter. This last weekend has been fun and there have been lots of fantastic photos on social media. Sunday was quite amazing as an extensive piece of sea ice formed on Loch Leven. As is often the case in our maritime climate, there’s been a thaw overnight with much melting, but plenty still remains with temperatures hovering around freezing all of this week. Some snaps from the last couple of days….

Moonrise over the Pap of Glencoe this evening….

It’s fair to say that November weather in #Glencoe is not always the best, being particularly wet & grim recently. It was so dark this morning that the light sensitive security light came on at 10am!
There’s still no place we’d rather be; looking through some old photos this evening we thought we’d share a random selection with you of our world class scenery in it’s different moods…

We are delighted today to have received TripAdvisor’s “Travellers’ Choice” award for 2020 and exceptionally proud to be in the top 10% globally on trip advisor.
Many thanks to all our lovely guests that have taken time to leave us with great reviews.